How to Make Delicious Jerky After a Successful Hunt 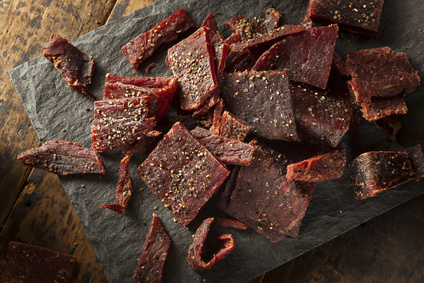 You have just completed a successful deer hunt, and you are wondering what to do with all this extra delicious, and nutritious, protein for you and your family. Venison steaks and roasts or deer burgers and sausage are the most common uses for deer meat, but one great option that often goes overlooked is deer jerky.

Deer meat is soft, lean, and flavorful, which makes it ideal for using in jerky recipes. However, the same basic idea also works with elk and other similar red meats, including beef. If you do not know how to make jerky, here is a brief guide along with one of the best jerky recipes out there.

Deer jerky comes in two basic types: sliced jerky made from solid muscle or pressed jerky made from ground meat. Sliced jerky is made using very lean cuts of meat that have no gristle. Most often it is meat from the back leg or hind quarter of the deer that is used to make jerky. The area is technically known as the round, and contains several muscle groups.

The three major muscles that you will be using to make jerky are the eye of round, bottom round and top round. All three of these muscles are extremely lean and basically free of gristle. They are the exact same muscles that you use for cutting steak from a deer. The difference occurs in the method that the meat is cut. While steak is cut against the grain, jerky is cut with the meat’s grain. Cutting your jerky meat with the grain is what produces the slightly stringy and very chewy consistency that defines high quality, and satisfying, jerky.

Now that you understand the basics, it is time to learn how to make jerky. Since sliced jerky is generally what hunters imagine when they think of jerky, we will focus on a recipe for making the best sliced deer jerky.

1) Cut 3 pounds of round with the grain around 1/4″ to 3/8″ thick each. Try freezing the meat for around an hour to an hour and a half before cutting to make it easier to get clean and uniform slices. After you dry the meat, these three pounds of starting meat will end up as around one and a half pounds of jerky.

2) Mix the following ingredients together in a large bowl.

3) Cover each slice of meat in the spice mixture by dipping in both sides. Be sure that the total surface of each slice is covered. After you have dipped and covered all your meat, put the slices into large zip-lock bags.

4) Pour all the extra spice mixture onto the meat in the zip-lock bags. Close the bags and place them in your fridge for at least a full day. Try to mix the meat and spice marinade around a few times during that day.

Once it has marinated for a day or more, it is time to dry the meat. There are three different methods for making the actual jerky once you have the sliced and marinated meat prepared. Smoking is considered to be the best method for making the tastiest and chewiest jerky, but a dehydrator or an oven also make great jerky when done right.

1) Turn the oven on and set the heat at the lowest temperature.

2) Remove the prepared meat from your refrigerator. Put the meat on oven racks or a clean metal screen. Maintain around 1/8 inch to 1/4 inch of space between each slice. Never let any slices overlap, or the area that is overlapped will fail to dry properly. Put the racks into the oven.

3) Leave your oven door slightly ajar, which will let the steam escape. Let the jerky dry for around 6 hours, though you can remove it a little earlier or later depending on how dry you want it. The drying time will vary for each oven so be sure to check the jerky every hour at least. Plan on being around for the whole process to ensure that it turns out right.

1) Set you dehydrator to pre-heat at the highest setting.

2) Remove the prepared meat from your refrigerator. Put the meat on the dehydrator racks, keeping 1/8 inch to 1/4 inch of space between slices. Never let any slices overlap, or the area that is overlapped will fail to dry properly. Put the racks into the oven.

3) Turn the dehydrator up to its highest setting, which is commonly around 150 degrees.

4) Set the dehydrator’s timer for 8 hours. The drying times will vary for each dehydrator, so be sure to check on your jerky every hour. Do not leave a dehydrator on unattended. Plan on being around for the whole process to ensure that it turns out right.

2) Remove the prepared meat from your refrigerator. Put the meat on your smoker racks. Maintain around 1/8 inch to 1/4 inch of space between each slice. Never let any slices overlap, or the area that is overlapped will fail to dry properly. Put the racks into the smoker.

3) Dry the jerky at 180 for around 3 hours. Do not use smoke for this stage, it will just lead to a disgusting tasting liquid pooling on the jerky.

4) If you want a smoky flavor for your jerky, soak some wood chips for about one half hour right before you add them to the smoker. When the jerky surfaces are dry and slightly tacky to the touch, add the soaked wood chips to your smoker.

5) The drying times will vary for each smoker, so be sure to check on your jerky regularly. Do not leave a smoker unattended. Plan on being around for the whole process to ensure that it turns out right.

Making Your Own Jerky

The best part about this brief guide is that it gives you the basics on how to make jerky, and then leaves it up to you to learn how to make the perfect jerky for your tastes. The recipe and drying methods are all open-ended, letting you tweak the details until you get that perfect piece of jerky every single time.

[…] The dried vegetables could be used in snacks or soups. Dried meat can be seasoned and turned into jerky, the most common types of jerky are beef, turkey, venison, and buffalo. Raw food lovers often use […]